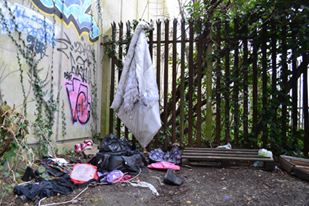 Homelessness in Southampton- A growing trauma

Walking down Southampton High Street, Portswood High Street, and other areas in the city, you will see people, mainly men, are sitting on the floor begging  and/or sleeping rough. They are not looking well and are asking for our help.  There is controversy over how many of these people fall in to the category of homeless. Some have been branded as con-artists, or “not even” homeless by the local press and by parts of the council. Intentional or not, this has had the effect of tarnishing a whole group of vulnerable people as potentially criminal.  The real story is that homelessness in Southampton, whether visible or invisible, is a growing problem for these people experiencing it and those at risk-of homelessness.

Let us first tackle a few misconceptions regarding the wider problems of visible and invisible homelessness. Those who suffer from this ongoing trauma, and those working inside the charity and local government sector have a great deal to tell us:

Our current council have recently publicised one solution to the visible “problem”, which looks set to go ahead, which amounts to removing street begging from the gaze of the rest of the citizens of our city. This will do nothing to alleviate the actual problems these people are living through.  The majority of these people begging will be homeless in one of the forms that have been highlighted above.  Everyone should remember that these people are citizens of this city, and should be treated with the same respect and dignity as the rest of us expect.

There are charities in the city which work in conjunction with the council’s housing department, to help the homeless.  The Society of St James, Chapter 1 and YMCA directly house struggling people in Southampton referred to them by No Limits, Probation, Social Services and other referring agencies. However, there is very limited availability, with priority going to those under 18 and pregnant women.  YMCA and Chapter 1 focus on young people’s housing needs, with the Society of St James predominately (but not entirely) focusing on older people’s needs.  When these services are full, especially during peak times such as the long winter months, homeless people have few back-ups to turn to.  Alongside this, emergency hostel accommodation in the city is in even shorter supply.  If you suddenly have nowhere to stay the night your options are almost non-existent. Being solely reliant on one’s own resourcefulness and resiliency during a time in your life when you are facing such trauma is extremely difficult to sustain without support.

What do we propose as a party to alleviate the suffering in Southampton?

As a party we are not blind to the savage cuts forced on local councils by this government.  Because of this, there are both short and long term local and national policies that require urgent implementation to improve the situation for those most vulnerable in our society.  Here are just a few;

There is more to this story, including the need to build huge numbers of affordable, high-standard and environmentally-sound rental housing. The current political climate and attitude towards taxpayer’s money and its use in the UK make these policies unlikely to be implemented anytime soon.  However, it is important to continue to listen to homeless people and experts in the field and to keep hearing and highlighting what a poor job this government is doing in helping these vulnerable people.  This government have continually stated their welfare and housing reform policies will not hit the most disadvantaged, but this is patently not true . The Green Party will continue to raise this issue and offer potential solutions to providing real support for those fellow citizens experiencing such a debilitating trauma.