Greens lead walk to reclaim Mayflower Park for the people 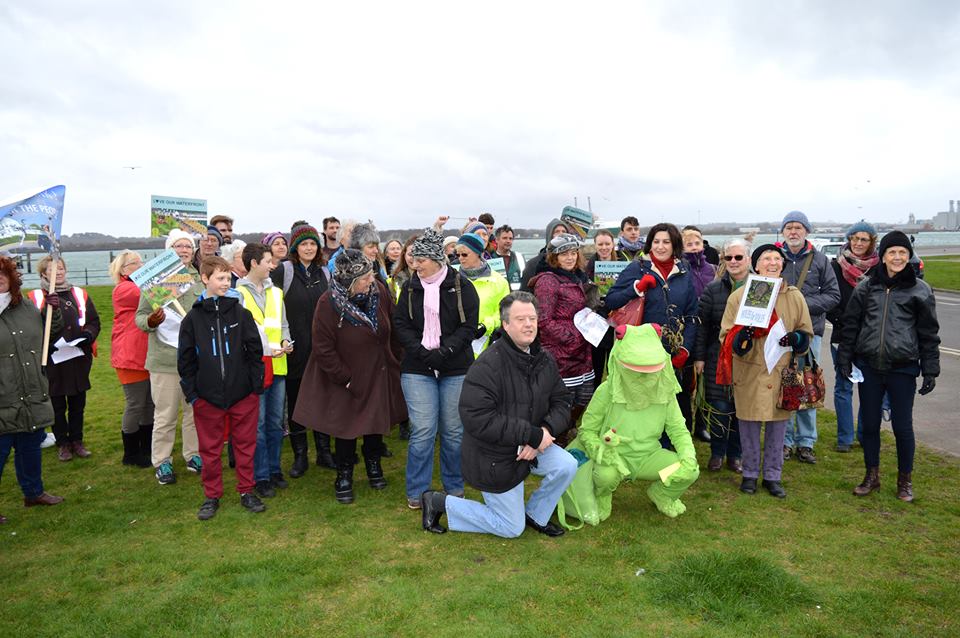 Yesterday Southampton Green Party hosted a well-attended ‘Love our Waterfront‘ musical walk through Southampton’s old town, which focused on the lack of public access to our waterfront. Many of the people of  the procession were inspired by a recent report on access to the Itchen and the Waterfronts of Southampton, published from the local Green Party. The walk took place on a blustery Saturday afternoon and was colourful and spirited – fitting for the many City residents who are seeking a more natural setting for all Southampton’s public waterfront areas.

After a warm up from musicians and singers outside the City Bargate, the parade (which included a good few wheeling pushbikes), moved along the QE2 mile attracting many positive comments from shoppers and passersby. Music and songs  were easily heard by the resident City folk and head count increased by the time the walk arrived at Town Quay.

At midday the orderly procession crossed over into Mayflower Park where a crowd of around seventy five people continued to sing and discuss the Waterfront (past, present and future).  It was here that Angela Mawle, a leading light in the Campaign and co-author with Angela Cotton of the ‘Waterfronts Report’, spoke. She discussed her objections to the £450m proposed Royal Pier development which includes Mayflower Park.

She criticised the proposals, saying, ‘the new plans are just high end housing looking out, it’s commercial activities, a large casino with some grass and paved walkways. How is that going to help people relax near the water in an area which should be 'the People's Park’?”

While the crowd gathered, Green Party volunteers encouraged them to share their love of the waterfront, their worries for its future and make suggestions for what they would like to see in the finished Mayflower Park development.

After a compilation exercise the campaign will move on to increase public awareness of sites where the riverside and waterfront are accessible. The Greens will also work with other groups to encourage only those developments that meet the needs of the local community.