City of Southampton Green vote up 300% 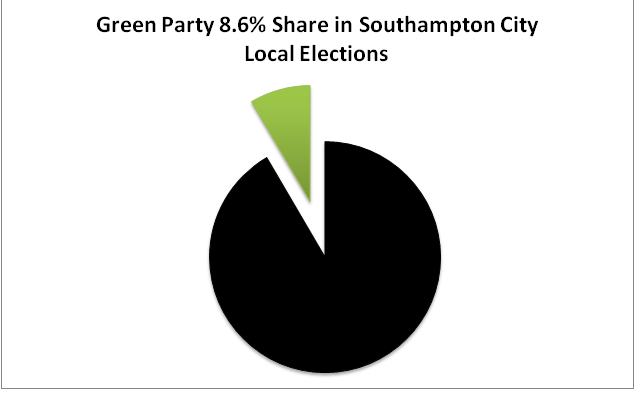 The Green Party is now a national presence and the million votes across the country are a testament to the vision, hope and commitment of voters, who despite a broken system of first past the post dog fights, had the courage and determination to vote for what they believe in.

Angela Mawle, standing in Southampton Test, who is the first Green candidate ever to exceed the 5% voting threshold in the City and retain her deposit, conveyed her satisfaction,

“ I am enormously proud that voters in Test raised the vote from 2.0% in 2010 to 5.9% in 2015 and would like to thank them for acting on their belief that the Green Party is the only national party committed to creating a fairer, healthier and  more sustainable future for all.“

After the votes had been tallied in the Local elections, it was confirmed that there was a +5.8% swing and several Council candidates were polling third place - included one four figure sum for Chris Bluemel standing in the City Council Portswood ward.