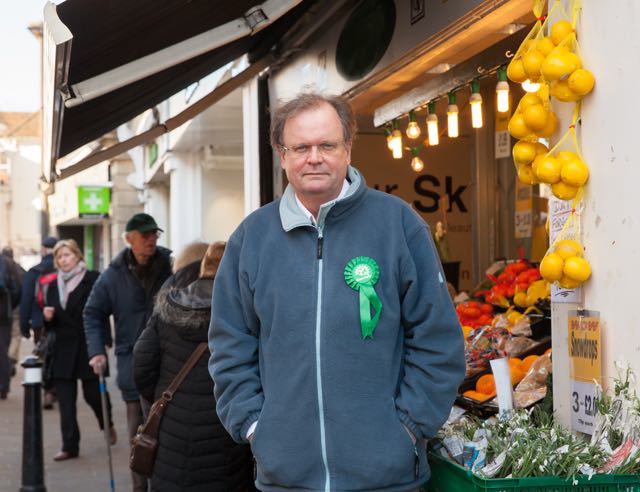 Making a “full house” of four candidates in the Southampton area, the Green Party today announces that Ian Callaghan has been selected as the candidate for Romsey and Southampton North.

Ian has lived in the constituency for 12 years and has been a member of the Green Party for a similar period. A seasoned environmental campaigner, he was Chair of the London Cycling Campaign during the early 2000s, when cycling began its massive growth in the capital.

He works in international development, and has raised over £300 million to support essential products and services to improve the lives of some of the world’s poorest populations.  These include such things as basic financial services, solar lanterns helping children study at night and clean cookstoves that reduce harmful gases that kill millions each year, especially women.

Locally, he is a churchwarden in Wellow, at the Church where Florence Nightingale is buried. The church attracts visitors from the nursing community all over the world and - along with Magna Carta - is celebrating its 800th Anniversary in 2015.

Talking about his reasons for standing, Ian said:   “Having lived in this constituency for over 10 years one thing I know we can depend on is the fair minded nature of Hampshire people. We believe in rewarding hard work and whether in city, town or country in this very diverse constituency, a shared sense of community and compassion underpins our values.

However, the truth is that the UK economy, for thirty years now, has been run in such a way that massive inequality exists and affects the lives and prospects of ordinary people and their children in really fundamental ways.

Citing some local examples he pointed out that, where people can get jobs, they often need to hold down two or even three. “And even then,” he said, “they probably still can’t make ends meet because the minimum wage is not a living wage.”  Problems of low pay are compounded, he pointed out, by lack of public transport, especially buses.  “When transport is run for profit and not  to meet the needs of passengers, people either can’t get to jobs they could otherwise take, or have to rely on cars they can’t afford. It’s the same problem when they try to access vital health and social services.”

Meanwhile, the wealthiest and large companies are not paying their taxes like everyone else has to, which puts an unnecessary squeeze on essential public services like health, education, and social care, and on cultural necessities like libraries.

What all the others parties are offering is just tinkering at the edges of a completely unfair system.  Only the Green Party is putting forward policies that will reverse the whole direction of travel into massive wealth for a few and increasing poverty for the many, and that promote the common good.

We need to put these policies of equality and social justice back at the heart of our communities and politics.”