As the election campaign swings into top gear, the battle for votes in the Eastleigh constituency will be particularly fierce. Our community is seen as a key election background, with the Liberal Democrats looking to buck the national trend of falling support, off the back of their support for the Tory government and their savage ideological inspired cuts. UKIP meanwhile see the constituency as a key election target and are throwing eveything at the seat. We in the Green Party are a grassroots campaigning party with a unique environmental and social justice vision for a Britain reorganised to provide for all of its citizens; for the common good ! Our major policy commitments to you the voter are outlined below we hope we can count on your support on May 7th.

Transport is a big issue in Eastleigh. If elected we would encourage reduced use of cars by improving cycle routes to encourage more cycling, encourage car sharing, and encourage more freight companies to utilise the railways to free up the roads. With the advances of the internet, certain jobs can be done from home thus further reducing the need for people to travel. It is Green party policy to bring back our railways to public ownership so that profits are returned to the people rather than to a few individuals.

Successive governments have tried to make education a ‘tick the box’ exercise. This close monitoring of every step of a child's progress makes the child a controlled unit rather than a free individual, free to explore their own ideas about life. Our current system does not cater for this individuality, and schools that put emotional wellbeing at the core are few and far between and often expensive and inaccessible. Whilst it is important help a child achieve their best in terms of academic education, it is far more important to help that child become an emotionally stable person who has the maturity to deal with life's complexities. If elected we would fight to right the wrongs of the system. We would like to see education emphasise the development of each child’s individual strengths which may be in subjects frequently less favoured. More equal emphasis on arts and modern science application - a more vocational curriculum tailored to each child rather than forcing young people into poverty because maths isn’t their strong point. Happy children learn more, we need to get our children moving, not just stationary desk-learning.

We need to stop using the NHS as a political football. The Green Party believe in a fully funded NHS paid for out progressive taxation, and I believe it should run as autonomous non-profit organisation allowed to get on with servicing health needs of the nation. We don't believe in running health services privately for profit and we do believe that it is immoral to profit from ill and vulnerable people. We would like to see Eastleigh with its own local health unit which can be used for small injuries and other minor operations, as well as addressing the local GP deficit. We are aware that the green light has been given on a critical care hospital to be developed north of the M3. This is a great distance for many patients to travel and we are aware that many constituents are very concerned about this. Moorgreen hospital is being considered for a large housing development and many residents are concerned about the way in which hospice care can be catered for should these plans go ahead.

Since the 1980’s social housing has been sold off leaving a housing crisis for those that follow. With property values soaring many young people are left unable to climb onto the ladder due to the requirement for large deposits, this along with the rise of the private landlord and the subsequent spiralling of private renting costs has meant it is virtually impossible for anyone on a minimum wage to rent a property and save for a deposit. Thus leaving a whole generation trapped. The Green Party will abolish the bedroom tax, provide 500,000 social rented homes (including bringing empty homes back into use) and cap rents so they are fair for all. In Eastleigh there are many housing issues and these need to be tackled by sensible policies not the current policy of tearing down NHS facilities such as Moorgreen Hospital or building on our green spaces such as Stoneham Lane. Cramming more houses into areas without the proper support networks will just lead to problems for the environment, transport, schools, and the NHS. 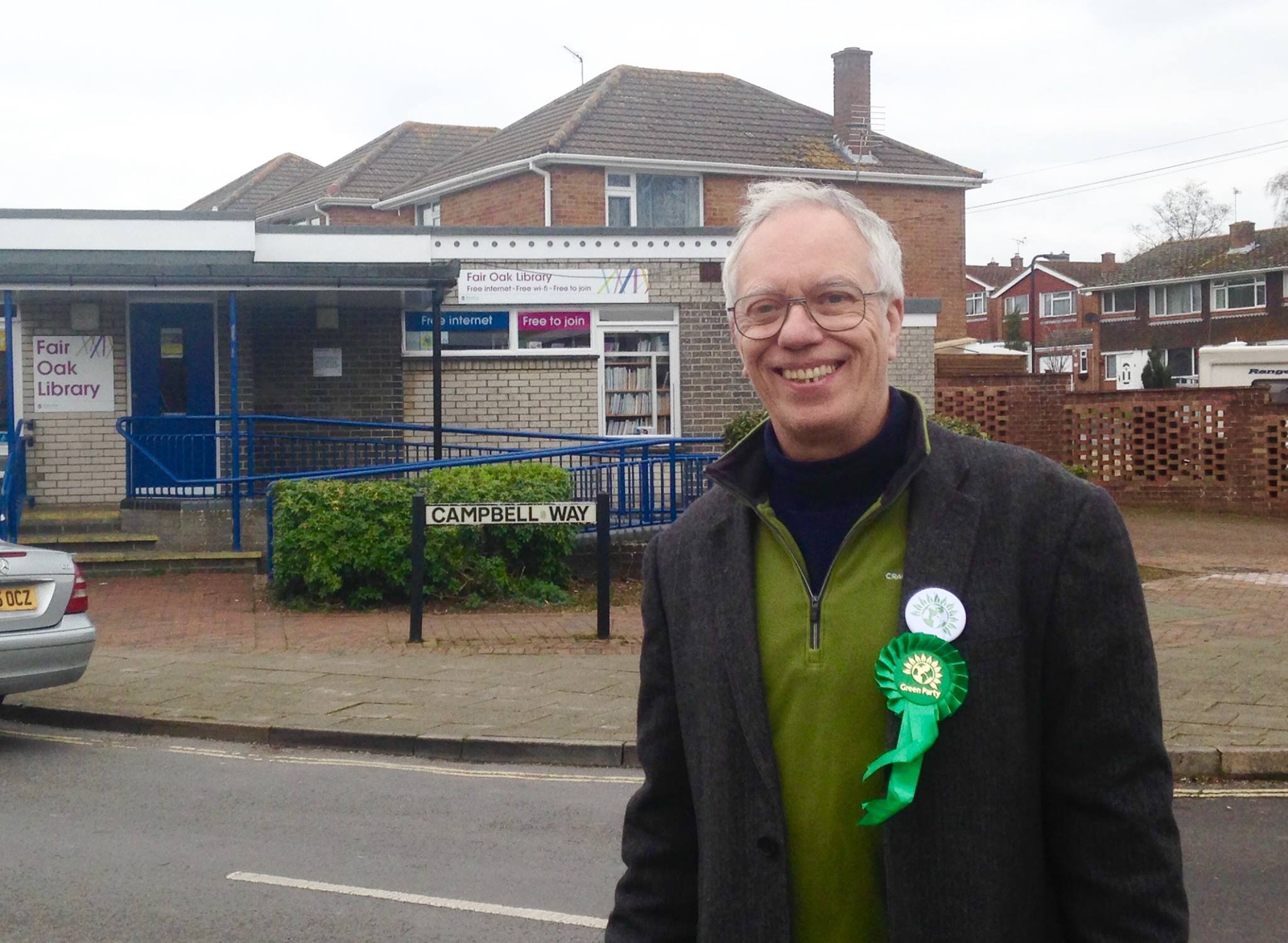 "People have become much more aware since 2001, and they are aware that politics has not changed to vehemently challenge the biggest problems in society as is required. People are more disillusioned with politics than ever, which is where we come in. We are the only party that offers something other than the status quo, and the voters are starting to see that. The only wasted vote is one for a party or candidate which you dont believe in."

The UK is a small country and has a maximum carrying capacity (maximum population). It is clear that it is not sustainable to carry on increasing our population. Therefore we need to have fair border controls, fairer than currently exist and fairer than what is being proposed by the other parties. We must put sustainability at the heart of our immigration policy and ensure that all people can live well, and have their basic needs met in every country to reduce the number of people that feel that they must flee their country of origin to be able to live. It is also about education, and informing the next generation in regards to the effects their life choices will have on the planet. The economic system we run can only be supported by increasing GDP on an annual basis. This in turn needs us to create jobs and people come here because we are creating jobs. So to move to a new economic system of Positive Money would also alleviate some of the strain on our services, however instead of scapegoating minorities we must look to solve the individual problems that people are facing in terms of housing, education and health which are all struggling under the current system. We need immigration for those sectors to thrive, and immigrants pay more in taxes than they cost.

The Green Party believes in local enterprise and keeping money flowing for the benefit of the local community. Therefore we reject large multinational companies, who inherently take money out of communities and work to the benefit of the 1 per cent. We believe that one law that stifles local enterprise and favours the large companies is the leasehold law. If elected we would push for changes in leasehold law to enable local business to flourish. We believe it is pointless and insulting paying people less than what they need to live on. This creates a strain on society. To allow people to make ends meet the government often has to top up people income. The Green Party would replace the minimum wage with a living wage. The Green Party also believes no one should earn more than 10 times the lowest paid person in that organization.

The UK and many other countries run a debt based economy. Money is continually being taken out of the economy through interest payments. The only way the system can survive is through continual expansion and rising GDP year on year. This is bad for the planet and increases demand on diminishing resources. The Greens want to see a system of sustainability and believe this can be achieved by introducing a Positive Money system as Iceland and possibly Greece are doing.

The Green Party would scrap the trident nuclear program. We see Trident as a weapon of attack not defence. If we have weapons of attack, it not surprising that others may wish to equally have such weapons to attack us back. Further the world has changed from the cold war and there are now different security issues at stake. Our army needs to be retrained and equipped to deal modern issues. There are plans to spend £100,000,000,000 (that is 100 billion) on trident, the Green Party believe that money is better spent trying to equalise our unfair society.

It is very important that we reduce our CO2 footprint to avoid potentially catastrophic climate change. Climate modellers across the world suggested in as little as 35 years we will start seeing regular heat waves, droughts, flooding, strong winds and the beginnings of notable sea level rises. This will clearly reduce our ability manufacture food in the UK, and reduce our ability to be sustainable. So we must change the system to be more sustainable now. Locally we can do more to improve our recycling capacity, reduce car usage, and support a variety of local green initiatives.

We support the legalisation of cannabis and the decriminalisation process in general to move away from the crime approach to drugs which has so clearly failed towards the health approach. We support the national party stance to adopt an evidence based approach to the step by step regulation, starting with cannabis, of the drugs currently banned. We believe introducing a system that reduces harms and brings the market under state control as a potential tax revenue generator is the right way forward.