Here are the Southampton & District Green Party candidates you'll be able to vote for on 6th May: 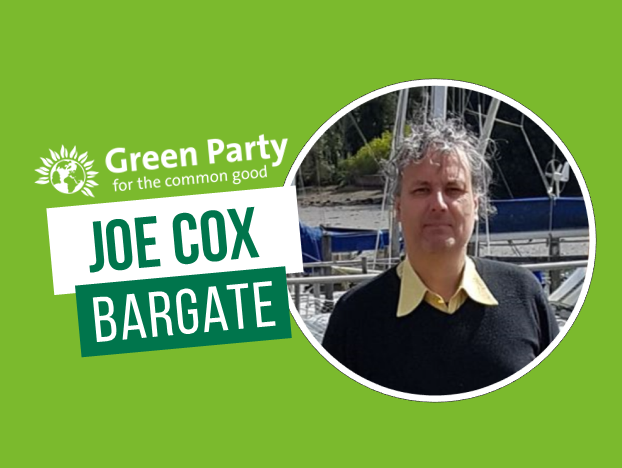 Joe has  lived in Southampton just under 30 years having returned from living and working in Southern Spain for a few years. When possible he continues to cycle around the city and to work. Joe's vision to help Bargate residents includes the following ideas:

Currently working at the University of Southampton he is responsible for initiating and managing projects that will improve student sport experience. Current priorities include data collection, free sports, departmental strategy, and supporting student sports clubs to develop. 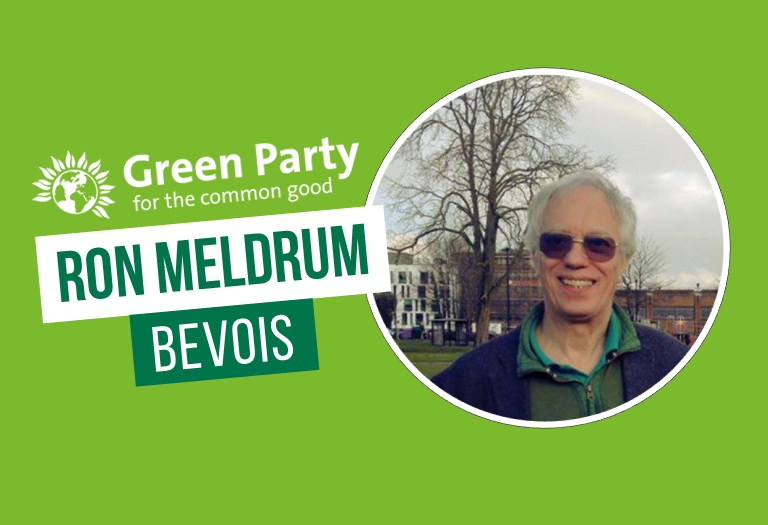 Ron Meldrum is very knowledgeable and passionate about environmental issues, he lives in Portswood, is a regular cyclist and is keen to help Southampton become a cleaner and less stressful place.

Ron has a B.Sc. in computer engineering. He has spent many years in industry and has good knowledge of the needs of business.

Ron is particularly interested in politics of mental health and education. He believes that part of being Green is being a emotionally a well ground person and would like to see education directed more about personal development, than the ticks in boxes process that children are offered in today's environment. 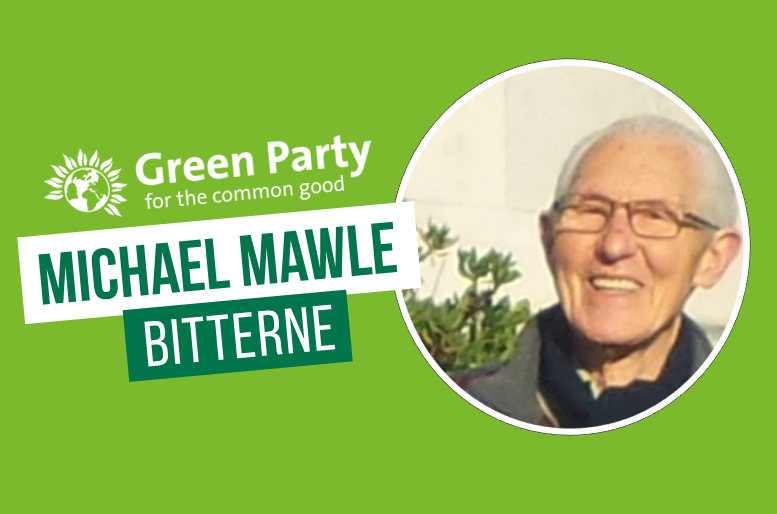 Michael has been a committed party member for over fifteen years. Prior to retirement he worked as a solicitor in collaboration with the National Union of Students supporting students around the Country and particularly in London. 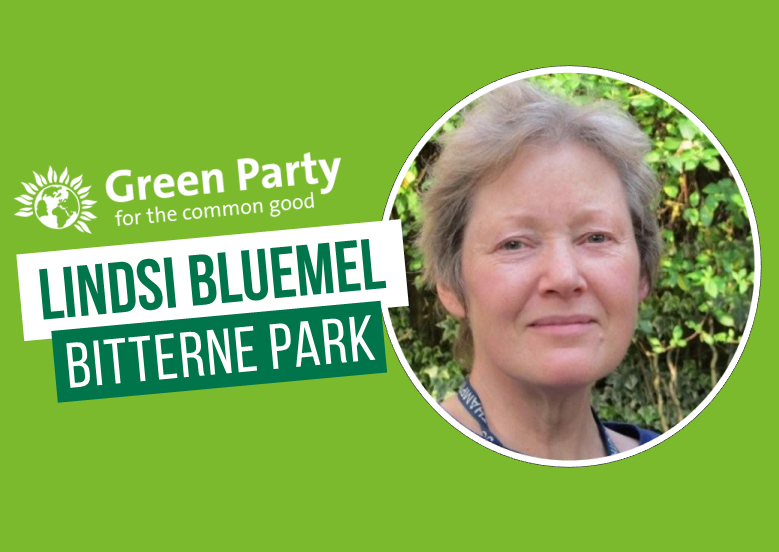 Lindsi Bluemel has lived in Southampton for over 30 years and is passionate about the history, culture and environment of the city.  She has been an active member of The City of Southampton Society, Southampton CND, Southampton Cycling Campaign and the Friends of Cobbett Road Library.

Lindsi has studied at both Southampton and Solent Universities and has worked at Southampton Magistrates' Court,  Southampton Mind and as a cycling instructor in Southampton schools.  She currently works as an artist and her books and cards can be found at October Books and Bitterne Park Stores. 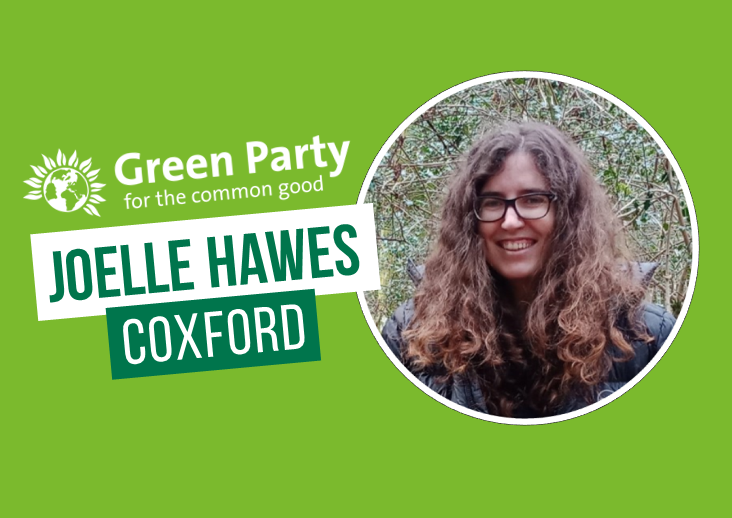 Joelle has been campaigning with the Green Party from the beginning of this year. She believes our future depends on the humans and nature living side by side in mutual cooperation - she hopes to see this as a reality one day.

If she were to be elected, she would push for more electric vehicle charging points, more funding for solar panels around the city and to make it easier for households to invest into them.

Rewilding parts of the city and “green walls” are two important projects where Joelle is keen to help start projects where people of all backgrounds and ages can come together and grow something.

Our future is simply GREEN. 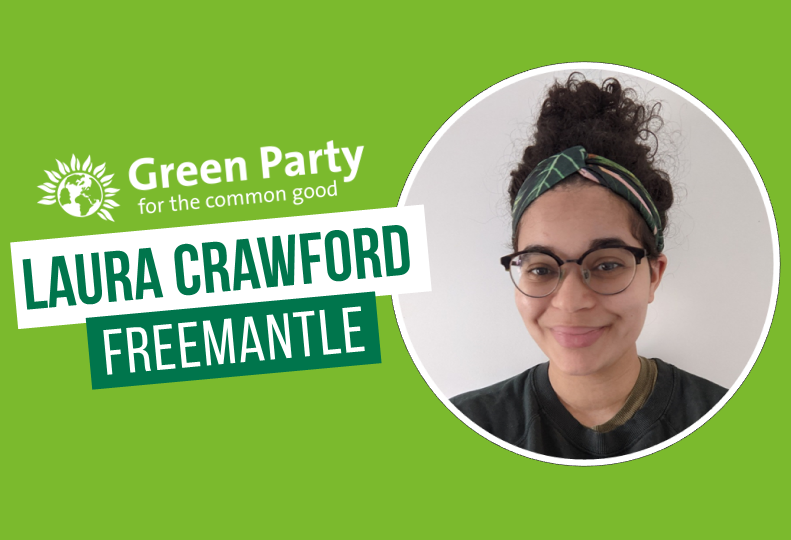 Laura moved to Southampton 10 years ago to study. She is currently a student radiographer and looking forward to working for the NHS when she qualifies.

Laura feels like the Green Party are the only party whose policies align with achieving a fairer and more sustainable world. Laura loves the green spaces in and around Southampton, like the Common, and wants to help ensure that these can be enjoyed for years to come. She would like to see alternatives to driving, such as walking, cycling and public transport be made more accessible to all. 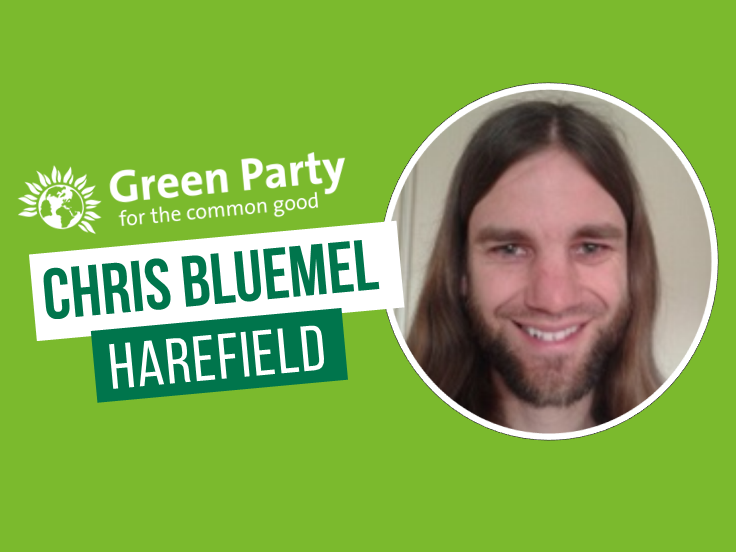 Chris is a self-employed musician and teacher. As well as teaching in and around Southampton, he accompanies the local choir the Conchord Singers, as well playing in a couple of bands both here and away. He also volunteers in an independent bookshop.

He is a passionate campaigner for peace, social justice and environmental protection, and has been involved in a wide variety of campaigns over several years, including residents' opposition to a biomass plant in Freemantle, and limits on aircraft noise from Southampton Airport. 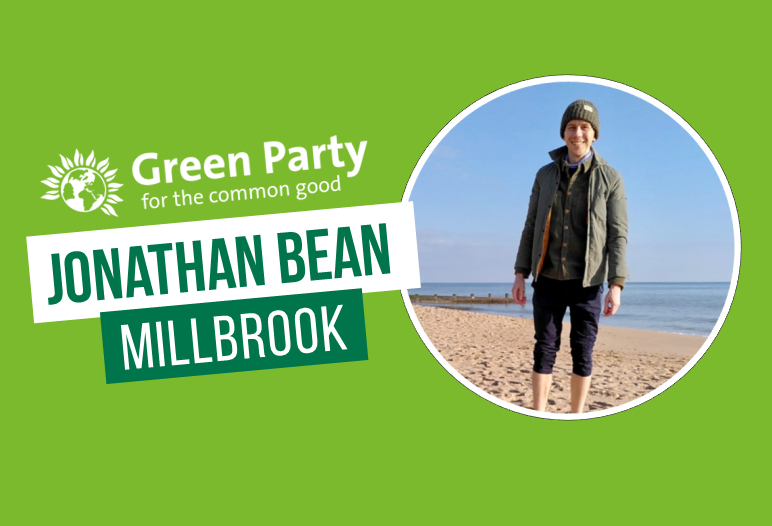 Jonathan has lived in the Millbrook ward of Southampton since 2006 after moving here to study, and now works as a writer and charity fundraiser. He believes in a fair society that prioritises the wellbeing and health of people and the environment we live in.

Southampton is a great city with a fascinating history and a future full of exciting possibilities. Jonathan is proud to call Southampton his home town and would consider it a privilege to serve the community as a councillor. In his spare time, he enjoys music, art, running, gardening, and eating out. 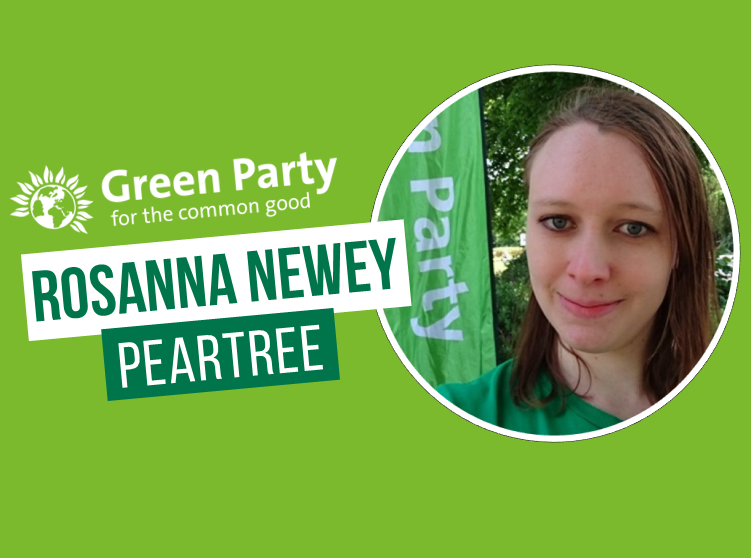 Rosanna grew up in Hampshire and has lived in Southampton for just over four years, with a 14-month gap in-between to live in London to work for the Green Party MP Caroline Lucas in her Parliamentary office. She studied History at the University of Exeter (based at the Cornwall Campus) where she learnt economic history and the importance of social movements, and now works at the University of Southampton, where she commutes by foot and uses public transportation to get around the city.

She believes that a properly funded public transportation network and pedestrianisation of cities are vital in order to improve both air quality and the lives of residents, but also that more pressure needs to be put on large corporations responsible for polluting the planet. If elected as Councillor, Rosanna would focus on addressing air quality, traffic congestion and homelessness by pushing for improved cycling infrastructure and public transportation as a real alternative to taking a car and emergency accommodation with more social homes that people can realistically afford. 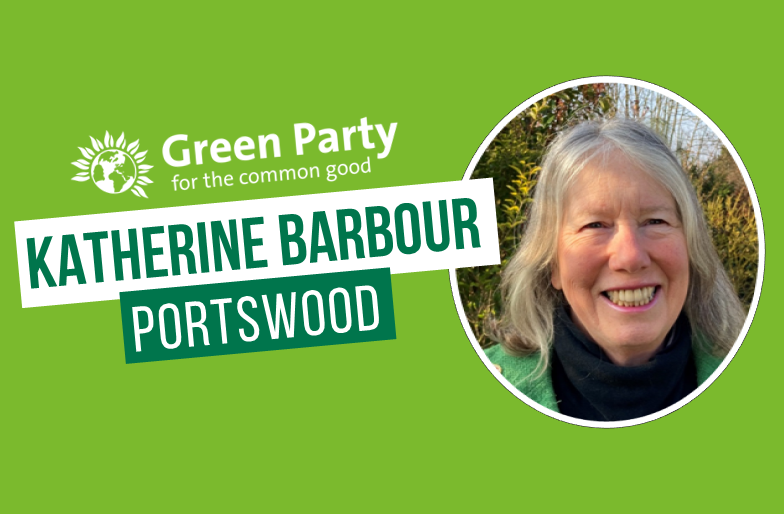 Katherine Barbour lives in Portswood where she is standing as the Green Party Candidate. Most of her career has been in health and social care and sees the NHS as one of our greatest resources to be protected at all costs. She leads community projects such as making Portswood, Highfield and St Denys dementia friendly and has worked with residents of Kent Road to address the excessive use of HGVs along a quiet residential street. Addressing air quality in the city is one of her priorities. 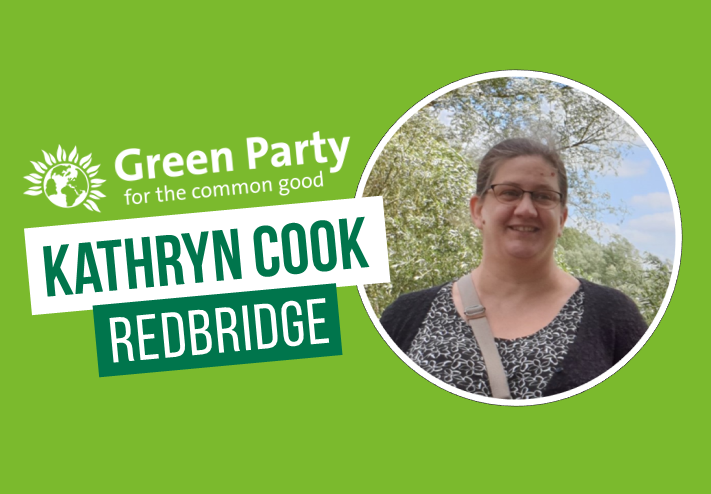 Kathryn moved to Hampshire in 2018 to take up a job in Southampton. She has a BSc in Biological Sciences and has worked in research, monitoring and assessment of the marine environment for almost 20 years. Kathryn believes that a healthy natural environment is vital for our health and wellbeing, as well as for a sustainable economy. She also strongly believes in the importance of social equality and human rights.

Kathryn has been a long term Green Party voter, but recently decided to become an active Green Party member because she believes they are the only party taking serious steps to tackle the climate emergency. She would like to see a reliable and affordable public transport system that provides a real alternative to car journeys for everyone to help tackle greenhouse emissions and poor air quality. 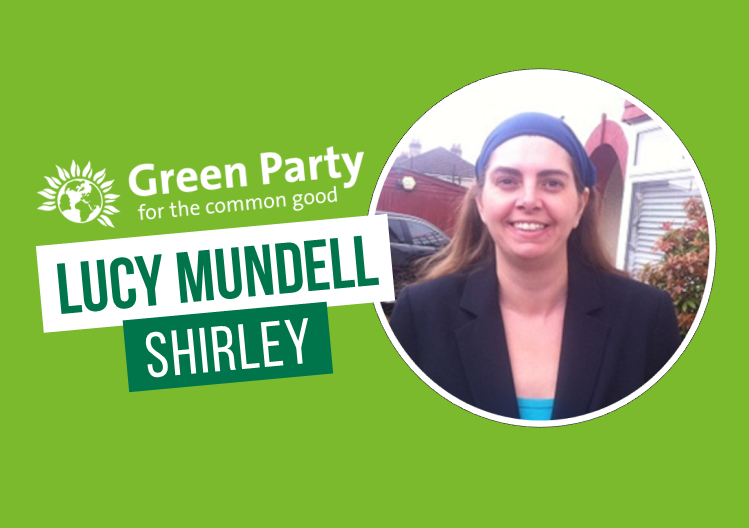 Lucy has been a Hampshire resident for most of her life. She became interested in environmental issues as a young child and followed this with a degree in marine & environmental studies.

She has since started an upcycling business 4 years ago in order to find a moral way of living and at the same time reducing her impact on the planet.

Lucy joined the Green Party as she finds their social policy has a more balanced approach to both people and the world we live in.

Having a multi-cultural family and many friends with other nationalities she finds the UK’s position over Brexit appalling. Remaining in the EU gives us better voice. 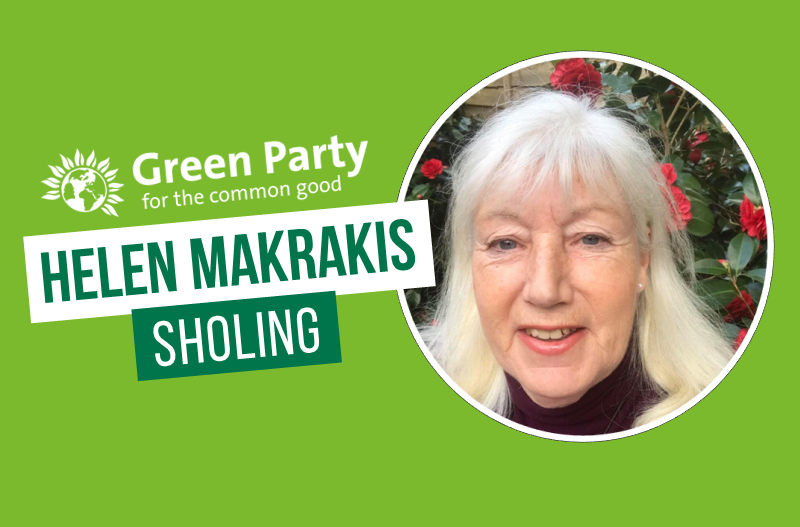 Helen has lived and worked in Southampton for forty seven years and  has been involved with the community through work as  School Governor and  Chair of   the local Community Action Forum.  She started a Resident’s Association and  become the Chair of the Forum of Residents’ Associations.   Helen was elected as a Southampton City Councillor, (some 25 years ago) and became Spokesperson for the Environment.

It was during this time that she helped to start the Councils’ 24 hour noise and nuisance call out service, amongst other things.  Helen’s objective is to help facilitate a linked-up plan for the progression of our City…presently it lacks direction and co-ordination. 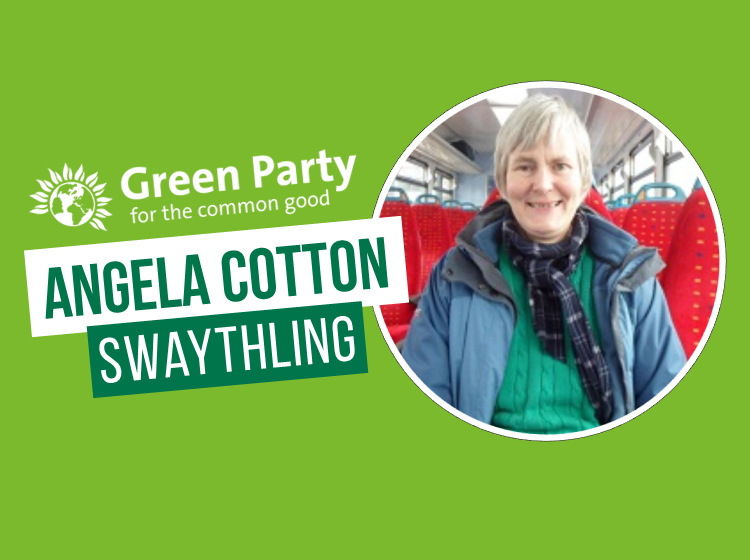 Angela has lived in Swaythling for over 20 years. Before retiring she worked at Southampton General Hospital as a Medical Physicist for over 30 years so is well aware of the challenges facing the NHS locally.

She is active as a volunteer in her local community and is currently co-chair of Transition Southampton, a community organisation working towards a more sustainable city through projects such as Southampton Repair Cafe. While she believes climate change is one of the most important issues we face, we also need to address chronic problems of traffic congestion and air pollution in the city, and the many social problems arising from poverty and social exclusion. 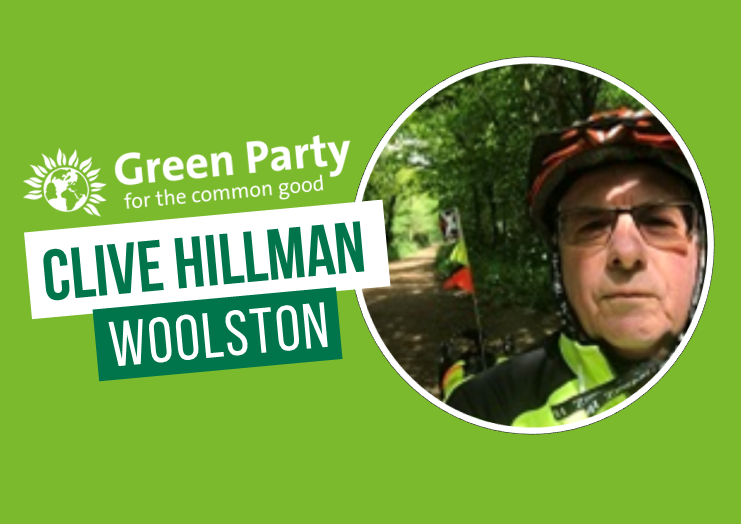 Clive is a Centenary Quay resident since 2016 and has previously been both a Town and District Councillor in West Berkshire. He has always been an environmentalist but after doing an OU Environmental Studies degree in retirement he really came to align with the Green Party.

He is a supporter of action for clean air, improved cycling infrastructure, proportional representation and of course, the 'Peoples Vote and Revoke Article 50' campaigns. The bottom line for us all is consume less and reduce our impact on the environment.

Clive believes that the UK can only prosper and build a strong economy in order to improve our society by staying in the EU, and is absolutely certain that local representation and actions can influence council thinking and decisions.